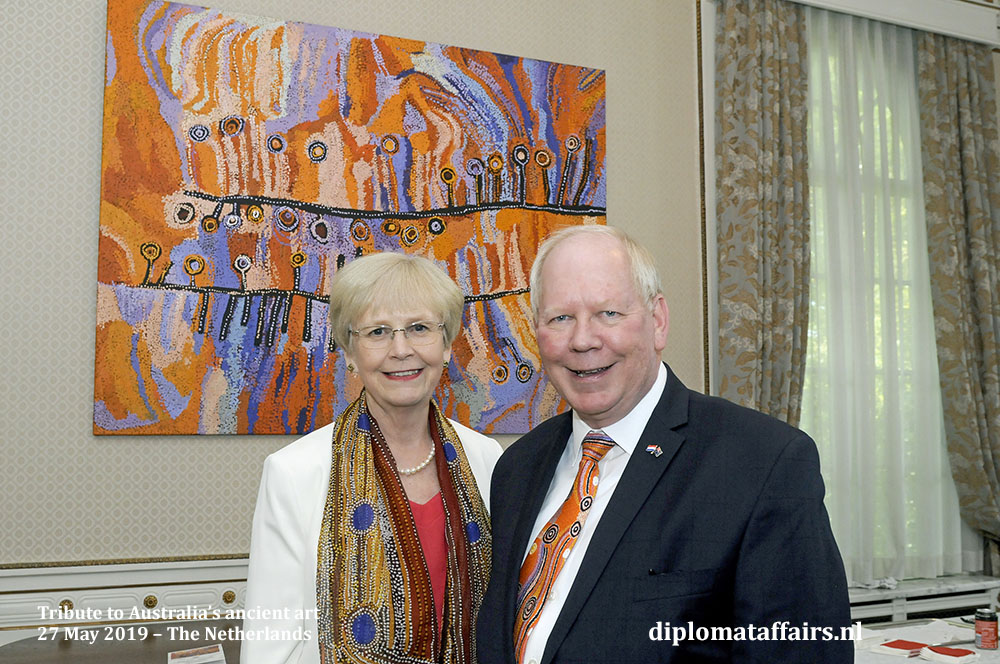 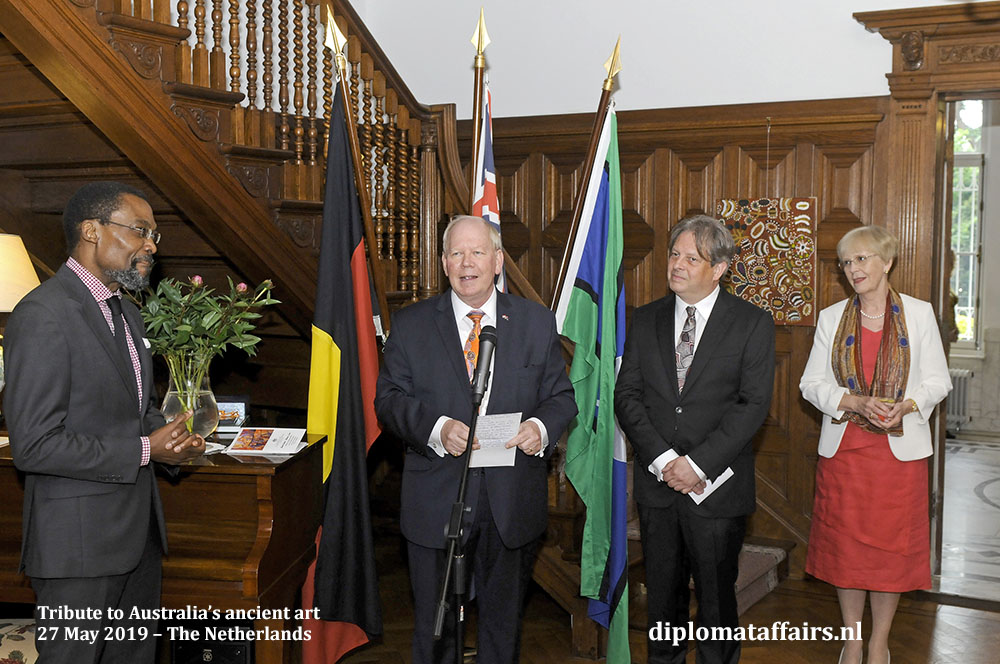 On 27 May, the Ambassador of Australia to the Kingdom of the Netherlands, H.E. Matthew Neuhaus and Mrs Angela Neuhaus opened the “Gender Justice – Women’s Business” exhibition at the Australian Residence in The Hague in the presence of a large number of Dutch and Australian guests.  The exhibition is centred around Australia’s national gift to the International Criminal Court (ICC) and was held to mark National Reconciliation Week with a tribute to the ancient art of Australia’s indigenous people.

Australia’s national gift to the ICC is entitled Ngayuku Mamaku Ngura (My Father’s Country) 2017, by artist Wawiriya Burton. The ICC seeks to globally fight impunity by bringing those responsible for crimes against humanity before international justice. Australia is a strong supporter and member of the ICC. This important painting by a senior Aboriginal woman artist speaks about the importance of law and justice to a safe and peaceful society.

Wawiriya Burton (born c.1928) is a senior Pitjantjatjara woman who resides in Amata in the APY lands (Anangu Pitjantjatjara Yankunytjatjara) in the desert of northwest South Australia. She grew up in the bush, living a traditional nomadic life and gaining an encyclopaedic knowledge of her country. She first saw white people at Warburton Mission as a young woman. Through her ceremonial activity as well as through her contemporary painting practice she is a guardian of the law and culture. She is also a traditional healer, known as Ngangkari in the Pitjantjatjara language.

In her paintings, Wawiriya Burton depicts her husband’s and father’s country as well as her own country. This is often referred to as Ngayuku ngura. Ngayuku ngura – Ngura can best be translated as ‘my home place’ or ‘my country’ – and it constitutes a central theme in her paintings.  In this particular work, she depicts a site in her father’s country west of Amata, near the remote community of Piplayatjara. This site is Nyumpanytja with, as its most remarkable feature the Cave of the Mice Women. At this important Law site and its cave Wawiriya became a woman: “It is an important place for pregnant women and those who are sick; it is not for men.”

National Reconciliation Week takes place from 27 May – 3 June and was initiated in 1996 offering people across Australia the opportunity to focus and reconciliation with Indigenous Australians as well as an opportunity for cultural engagement. The week coincided this year with two significant dates in Australia’s history, 27 May (anniversary of the 1967 referendum) and 3 June (Mabo Day). On 27 May 1967, a referendum passed where over 90% of Australia’s people voted ‘Yes’ to include aboriginal people in Australia’s population which sadly was not the case until that day. A historical wrong that had to be righted and it was the start of an important process. Mabo Day, 3 June, marks the anniversary of the High Court of Australia’s judgement in 1992 in the Mabo case which recognised Aboriginal and Torres Strait Islander people’s rights to land through native title. This year’s Reconciliation Week is another great step forward in Australia’s history with the appointment of the first Minister for Indigenous Australians, The Hon Ken Wyatt AM MP who said “Today is a day we share pride and respect for one of the oldest continues cultures in the world.”

Australia is proud of its Aboriginal art, which underlines the long history of Australia. Their designs are ancient even if rendering them in paint is new. This exhibition assembles twenty-four paintings from the former Aboriginal Art Museum Utrecht (AAMU) collection, now part of the Nationaal Museum van Wereldculturen and held by the Museum Volkenkunde Leiden. All the selected artworks are by senior women artists of the central and western deserts of Australia.

Their overarching subject is the Dreaming or the Tjukurrpa as it is known in most of the desert languages.The Tjukurrpa is the single important basis of the social structures, the law and the art. The Dreaming – a dimension running parallel to the measurable dimension of time as humans understand it – encompasses not only the past but continues in the present. It is closely related to nature and the environment. This ancient dreaming, rendered in modern art, has much to tell us about caring for our own environment and the importance of women as well as men in being its guardians.

These Dreaming creation journeys are preserved in a complex ritual comprised of song cycles, some of which count over a hundred verses. These same song-poems are still being sung and performed today during ceremony and rituals. Both men and women have specific Dreaming stories, with their individual heroes and related sacred places, and they hold ceremonies to perpetuate the knowledge and power of the Dreaming.

Ambassador Neuhaus: “It gives me great pleasure as Ambassador to introduce this exhibition of Australian indigenous women’s art, centred around our gift to the ICC in The Hague and drawing on the treasures of the Museum Volkenkunde in Leiden.  It makes the point that in a culture as ancient as that of the Australian Aboriginal people women had a central role in law and justice.  This is a point we still need to ensure is fully incorporated in our modern societies.  The need to anchor our laws governing human behaviour in the natural environment which sustains us all is also of increasing relevance today.  Let us reflect on these images of the Dreaming rendered by these inspired women artists, and the message it sends to our contemporary world”. 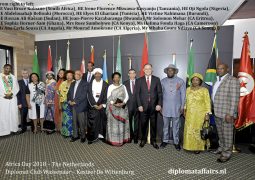 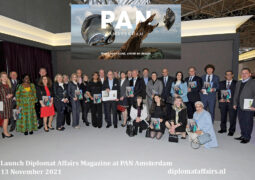