The Czech Chamber of Commerce organized a fruitful gathering in the Czech residence.

Hosted by His Excellency Mr. Jaroslav Horák, Ambassador of the Czech Republic, a reception was held on the occasion of the Czech National Day for the second time this year. This time it was organized by the Czech Dutch Chamber of Commerce, which serves as the bridge between Czech companies and entrepeneurs in The Netherlands. The Czech Dutch Chamber of Commerce was founded by Katerina Velisková and Vladimira Chýská, who were also present at the reception. Some of the services offered by the Czech Dutch Chamber of Commerce are hosting business, investment and legal seminars, helping its members in finding new business partners and providing the opportunity to network, which is an integral part of doing business. Parting Ambassador Horák held an interesting, and at times, humorous speech, looking back not only on his country’s fascinating history, but also on
his own four years in The Netherlands.

He briefly touched on the succession of events in his country after the 300 years of Habsburg domination. Ambassador Horák also shared a few personal facts about himself, such as his love for poetry and music, adding that he had written his last poem as long as ten years ago. The reception was concluded by a wine tasting of Czech wine. The Ambassador told his guests, that, although the Czech Republic is better known for its beer, its wine is definitely also worth tasting. The wine company Moravino was present to serve the guests, who wanted to sample the various Czech wines.

Ambassador Horák, who is a lawyer by training, will return to Prague in December, which he is very much looking forward to, as he will finally be reunited with his family. 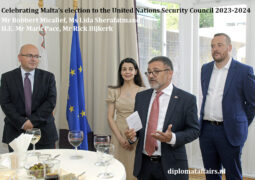